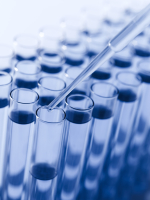 DNA consists of base pairs of Adenine, Thymine, Guanine, and Cytosine molecules connected with Phosphate and Deoxyribose molecules.  Adenine connects with a Thymine to form a base pair, while Guanine connects with Cytosine to form another base pair.
Adenine, Thymine, Guanine, and Cytosine molecules consist of Carbon, Nitrogen, Oxygen, and Hydrogen.  The Phosphate molecule that connects base pairs contains a Phosphorus atom with four Oxygen atoms.  The Deoxyribose molecule which also connects the base pairs contains four Carbon and one Oxygen atoms.

Since 14C has a half life of 5.73x10^3 years, there are 30.7 million 14C decays per year in human DNA, or 84.0 thousand per day, or 0.973 decays per second.  The molecular change in the DNA resulting from the 14C -> 14N decay can result in potential bond ruptures, DNA strand breakage, and nitrogen substitution in canonical bases which could affect the respective encoding, decoding, or subsequent transcription of the related genes.  Also, the Beta particle decay releases 0.156476 MeV per decay, or 1.3x10^4 MeV per day, in our DNA.

Since 3H has a half life of 12.32 years, there are 1.98 million 3H decays per year in human DNA, or 5,412 per day, or 3.8 decays per minute. The molecular change in the DNA resulting from the 3H -> 3He decay could also result in bond ruptures and DNA strand breakage effecting the respective encoding, decoding, or subsequent transcription of respective genes.  Also, the Beta particle decay releases 0.01859 MeV per decay, or 100.6 MeV per day, in our DNA.

The quantitative analysis of Carbon-14 and Hydrogen-3 decay in human DNA suggests that damaging and denaturing DNA is currently a continuous part of nature.  Our bodies are in a constant state of repair, or shut-down of cells that have malfunctioned.  In fact, as long as humans consume and consist of unstable isotopes, it's only a matter of time before a mutation happens that our cells are not capable of repairing or stopping.  Cancer occurs in each type of human body tissue as a result of these spontaneous genetic mutations that occur "naturally" due to our environment which includes "natural" radioactive unstable isotopes.

Linus Pauling, the Nobel laureate, once believed that Vitamin C could cure cancer.  He thought that if enough anti-oxidants were applied to a biological system, that all of the sources of error could be stopped and repaired.  But, the since the source of error is nuclear in nature, and completely unpredictable in timing and manifestation (in terms of genetic location), attempting to repair the damage with chemical means after the fact, was, is, and continues to be for all of us presently, a losing battle.